What Distance To Zero A .22LR Converted AR-15 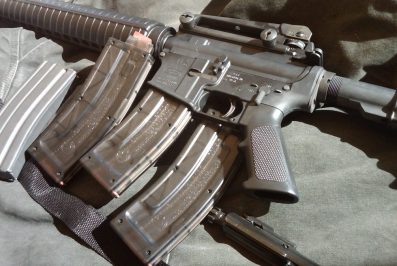 What Distance To Zero For .22LR Ammo With AR Style 2.5″ Tall Sights:

A friend recently acquired one of Colt’s .22LR M4 rifles made by Walther Firearms and asked if I would help zero the sights at the appropriate distance.  I had recently written about my research regarding What Distance To Zero Your .22LR Rifle, but I had never really taken dedicated .22LR AR-15 rifles seriously until I was asked to help zero this rifle.  Any traditional .22LR rifle has its sights mounted close to the bore, and traditionally red-dots are always mounted as close to the bore as possible.  I couldn’t see how you could have anything but a terrible .22LR ballistic trajectory with AR-15 sights that are 2.5″ above the bore.

Having been granted the opportunity to play with this rifle for a few days I ran a few zero distance calculations through an iPhone/iPad application called “Ballistic” using data for CCI’s 36-grain Mini-Mag ammunition, and I couldn’t believe how ignorant I had been. You can achieve very flat trajectories from .22LR ammunition and 2.5″ sights.  I played with several distances and tweaked it until I found the optimum zero distance of 25 yards.

Benefits of a 25 Yard Zero:

Note the graph above. From a distance of 13 yards from the muzzle, all the way out to approximately 89 yard, the point-of-impact of the bullet will never be +/- 1″ from point-of-aim. This means that you should be able to hit a 2″ target without any hold-over / hold-under correction anywhere within 13 yards to 89 yards!

The highest distance above point of aim is exactly 1″ at 50 yards.

At 100 yards you can expect your point-of-impact to be 2.37″ below your point-of-aim. To give you a visual, you will make hits below the point-of-aim less than the height that the sights set above the bore. This is pretty impressive, especially considering that you might be using a red-dot optic, such as the Bushnell TRS-25, with a 2 minute-of-angle dot (dot that appears 2″ in diameter at 100 yards).

If you have a dedicated .22LR rifle then you have a simple task of zeroing your rifle’s optic and / or iron sights.  Zero it for 25 yards and you are done.  Congratulations!