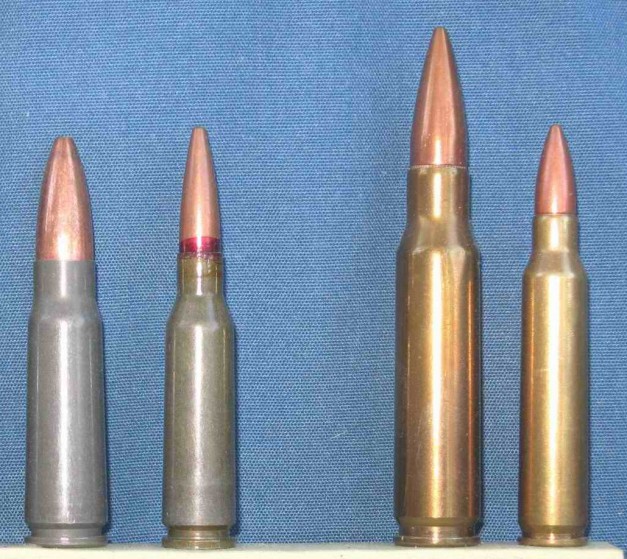 “Buy it cheap! Stack it deep!” 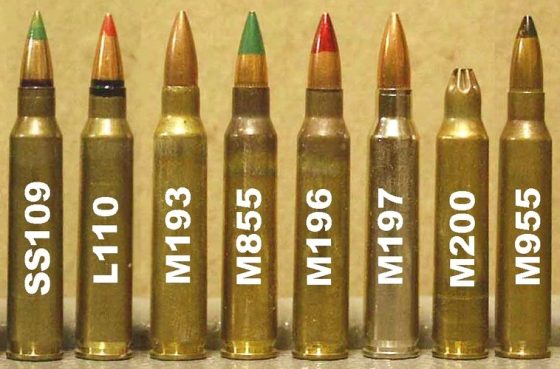 Difference Between .223 Remington and 5.56mm NATO: 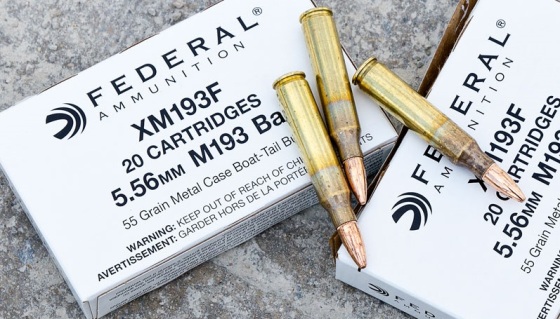 Weapons that fire 5.45x39mm Soviet include:

Weapons that fire 7.62x39mm Soviet include:

“7.62x51mm battle rifles are the best way to let people know that what they thought was cover is only concealment.”

Weapons that fire 7.62x51mm NATO include:

7.62x51mm NATO and .308 Winchester are names that are often used interchangeably, and although they look similar, the chart to the right shows that they are slightly different. 7.62x51mm NATO is a military round and is intended for MBRs (Main Battle Rifle) and MGs (General Purpose Machine Gun). The civilian .308 Winchester, which is commonly used in hunting and precision bolt-action rifles, has as much as 24% more chamber pressure than the 7.62x51mm NATO cartridge. While the .308 Winchester will fit and fire from a firearm intended for 7.62x51mm, it may sooner or later damage that firearm. Summary: It is okay to shoot either round from your bolt-action rifle that is chambered .308 Winchester, but only fire 7.62x51mm ammunition from firearms that are chambered for that round (military style rifles).

The clerk in the sporting goods section of you local Wally World told you not to buy the less expensive Russian/Ukrainian manufactured, steel-case, bi-metal bullet ammunition because it is dirty and will wear out your guns. The guy working in a retail store doesn’t have any idea of what he is talking about. Or does he?

In the mid 1990s I purchased a 1000 round case of Wolf brand, Russian manufactured, steel case 9mm 115 grain FMJ ammo. It was lacquer coated so as to keep it water proof, protect it during long-term storage, and keep the steel cases from rusting. I bought it with the intention of shooting from my new gen 2.5 Glock 26. In those golden days of cheap ammunition I was known to blow through it pretty fast. My guns stayed hot. While my Glock would eat anything with a brass case, I couldn’t even make it through a single 50 round box without the lacquer melting off the cases and causing them to stick in the chamber and not eject. The only way to get the empty cases out was to lock the slide back and pop the stuck empty out with a cleaning rod inserted through the muzzle. I had to use a brass chamber brush and scrub and scrub to get the chamber clear of all of the lacquer build up so that the gun would function again. I then had 950 rounds of shitty ammo and didn’t know what to do with it. Eventually one of our other members and I ran all 950 rounds through a Class-3 H&K MP5. The sub-gun shot every round full-auto without a single hiccup. It was filthy afterwards. I didn’t have to clean it, but I’m sure that who ever had to scrub 950 rounds worth of lacquer was pissed!

Fast forward to present day: Only Russian made “Brown Bear” labeled ammunition still has a lacquer finish. You can usually only find it in 7.62x39mm and 5.45x39mm, both of which are Kalashnikov rounds. (AK’s don’t care what you shoot out of them and will eat most anything.) Wolf and Tula do not lacquer any more. I have fired thousands of round of the modern Wolf and Tula ammunition out of my ARs, AKs, and Glocks. It always functions in my guns and is perfect for target practice.

Addendum: This past year I took James Yeager’s two-day Fighting Pistol and two-day Fighting Rifle class.  See Tactical Response’s Fighting Pistol and Fighting Rifle Courses: After Action Report.  We were told that it would be okay to use steel-case Russian Ammunition in our Glocks pistols and Kalashnikov style rifles, but they insisted that we use brass-case ammunition in our AR style rifles.  Evidently steel case ammunition expands and can swell and stick in hot AR chambers.  During the four days of class I fired 975-rounds of 9mm steel case ammunition from a Glock 17 without any maintenance or additional lubrication and it ran without any malfunctions.  My brother and I each ran 1300 rounds of brass-case 5.56mm without a single hiccup.  One student still used steel-case ammunition in their AR and suffered stuck cases when the weapon became very hot.