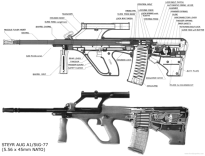 Barrel: The metal tube through which the projectile passes when the rifle is fired.

Bolt handle: The lever that the shooter pulls back to open the action on a bolt-action rifle and pushes forward to chamber a round and close the action.

Bore: The hole in the barrel through which the projectile passes. The diameter is measured in fractions of an inch (caliber) or millimeters.

Breech: The rear of the barrel.

Butt: The rear portion of the stock.

Chamber: Located at the breech end of the barrel and is the portion into which one round of ammunition is placed for firing.

Clip: A device to hold cartridges for charging the magazine of some rifles. Not to be confused with “magazine”. (See Magazine vs. Clip.)

Fore-end: the part of gun’s stock forward of the action, extending under the barrel and providing a grip for one hand below the barrel.

Grip: The part of the stock gripped by the firing-hand.

Hammer: The part the firearm that strikes the primer. In some firearm designs the hammer directly strike the primer, while other strike a separate firing pin.

Lands: The flat, raised ridges of metal standing between the rifled grooves inside the barrel.

Magazine: A container with a spring into which several cartridges can be placed. The two most common types are non-detachable box types located inside the bottom portion of the action, a tube type located under the barrel or in the stock, or detachable types that can be loaded and then slipped into place into the gun. The magazine uses a spring to push the unfired cartridges into the path of the bolt for loading. Not to be confused with “Clip”. (See Magazine vs. Clip.)

Muzzle: The forward end (mouth) of the barrel, through which the projectile exits.

Rifling: The grooves and lands inside the barrel. When a projectile passes through the barrel, the lands cut into the bullet to make it spin. This spinning action makes the projectile more stable and accurate in flight toward the target, similar to a well-thrown football.

Safety: Mechanical device designed to prevent a gun from being fired accidentally. When the safety is “on” it should block the operation of the trigger, thus preventing the firearm from firing. Always remember that the safety is only a mechanical device. Never depend on it as a substitute for following the safety rules. You are the ultimate safety.

Sights: The metallic or optical devices attached to rifles that enable them to be aimed.

Stock: The handle by which the rifle is held and which holds the other groups together.

Trigger: The lever that activates a firearm when moved, usually pulled by one finger.

Trigger guard: A protective shield around the trigger that keeps the trigger from being pulled accidentally.

Trigger pull: The amount of pressure needed to fully release a trigger to fire a gun.