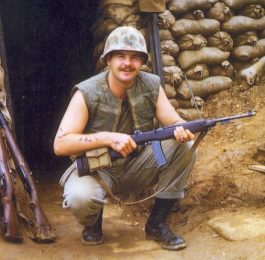 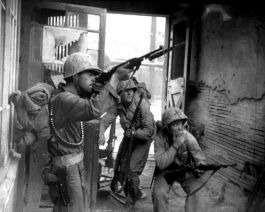 Introduction To The M1 Carbine: 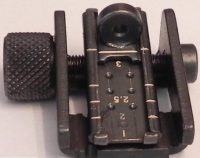 With the exception of early M1 Carbines that had a rear sight that could flip between a 150 yard setting and a 300 yard setting, most M1 Carbines found today have the newer style (late WWII / Korean War era) sights. These sights have settings for a 100 yards, 200 yards, 250 yards, and 300 yards (as pictured right).

This ballistic data and graphs are provided to give you a visual representation of the ballistic trajectories that you can expect when firing a properly zeroed M1 Carbine with the rear sight set with the different settings. This will allow you to find the most efficient setting for the type of shooting that you expect to be doing with your rifle.

With the rear sight set to the 100 yard setting I can easily hit a 12×18″ steel plate at 100 yards, but the bullet splashes short of the target when shooting the same size plates at 200 and 300 yards.

With the rear sight set to the 300 yard setting the bullet passes well over the target at both 100 yards and at 200 yards.  While experimenting at the rifle range I aimed at the upper chest area of a IDPA target at 100 yards away and the bullet flew completely over the top of the target, missing the bad guy completely.

Use the 100 yards setting if all of your shooting is going to be less than 125 yards.

Use the 200 setting if you have to shoot a targets that vary from close range out to 225 yards.

Only use the 300 yard setting if you are going to be shooting that far.

The Hague Convention of 1899, Declaration III, prohibited the use in international warfare of bullets that easily expand or flatten in the body. Used during WWII, the Korean War, and the early part of the Vietnam War, the M1 carbine was used exclusively with full metal jacketed ammunition as limited by the Hague Convention. The non-expanding ammunition gained a reputation as a poor man-stopper during the brutal winters in the Korean War when US troops witnessed the round fail to immediately stop charging Chinese troops in their thick, quilted winter uniforms. This type of ammunition is fine for training and target practice, but for self defense you will be better served with high quality expanding ammunition.

The two best offerings in .30 Carbine expanding self-defense ammunition are offered by Speer and Hornady.

I test fired a round of Hornady’s 110 grain Critical Defense ammunition (discussed in the second and third videos above) at three one-gallon water jugs lines up together at 100 yards away.  The bullet burst the first jug and passed completely through the second and third jugs.  The bullet was not recovered.  In the near future I will test the ammunition at 100 and 200 yards with more jugs to see just how many the bullet can penetrate.

Original WWII or Korean War G.I. issued magazines are considered the best, however they are very hard to find, and when you do, they are very expensive. 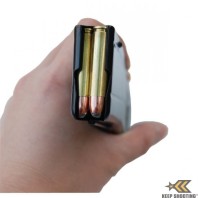 Keep Shooting’s M1/M2 Carbine magazines have developed a fantastic reputation. The internet is full of rave reviews of their 10-round, 15-round, and 30-round magazines. Not only do their magazines have a great reputation, but they very reasonably priced, and they are backed up by a no-questions money back guarantee.

I recently purchased six 15-round and six 30-round magazines from Keep Shooting. I planned to shoot these with a carbine that has historically exhibited dismal reliability with two no-name 30-round “gun show” magazines. I was hoping for reliability from the 15-rounder, but as I hadn’t had a chance to replace the M1 magazine catch with the M2 magazine catch (as discussed on Savannah Arsenal’s M1 Carbine Page), I didn’t really expect any different performance from the new 30-rounders from what I had experienced from the old magazines.

Since purchasing the magazines I have had a chance to shoot 350 rounds, divided equally between all twelve magazines, using the same clean and properly lubricated rifle discussed above, with Georgia Arms “Canned Heat” bulk packed 100-grain FMJ ammunition. All of the magazines performed 100% without any malfunctions, including all six of the 30-rounder magazines, even without the magazine catch upgrade. I will continue monitoring magazine reliability with these magazines as I get a chance to shoot the carbine again. I will update this post with any future experiences.

My current opinion is that with Hornady’s 100-grain Critical Defense ammunition and these magazines, that this rifle is a viable <200 yard defense tool.

* If the 30-round magazine is not shown on the link above then they are sold out. You can submit your email to be notified when they are back in stock. When you receive notification, be sure to order soon as they will sell out very fast.

Currently (as of July 2015) Korean manufactured magazines are plentiful and inexpensive on the internet.  Most people report good results with the 15-round magazines.

Don’t waste your money. They won’t work. Order from Keep Shooting as discussed above.

Many aftermarket reproduction M1 Carbine stock magazine pouches fit so snug on the carbine’s stock that you won’t be able to actually insert the two 15-round magazines.  Keep Shooting’s magazine pouch is guaranteed to fit the stock correctly and still allow you to store two magazines in it. 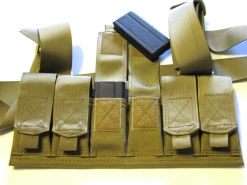