How To Load The SKS Rifle:

SKS rifles do not load from removable magazines like more modern battle rifles. Instead they load from the top using 10-round stripper clips. When the last round is fired the bolt locks to the rear. You can then reload by lining up the stripper clip into a groove located in the top of the rifle and push the 10-rounds down out of the stripper clip and into the fixed magazine of the rifle. After reloading the bolt will release, chambering the first round out of the magazine, leaving the rifle ready to fire again.

Aftermarket Magazine Modifications… Don’t Do It:

There are aftermarket kits that will allow you to replace the factory 10-round fixed magazine with a 20-round or 30-round magazine. I have limited experience with rifles equipped with this modification, but it appears that the longer the magazines make it more awkward to load the rifle.

There are also aftermarket kits that will allow you to replace the fixed 10-round magazine with 30-round reloadable magazines. The removable magazines have an awkward front attachment point that locks it into the rifle. The magazines will be problematic to carry in your load bearing gear. I can’t testify as to their reliability, but the ones that I have seen look chinsy and cheap.

How To Carry Ammo:

There are old Soviet and Chinese chest pouches that were specifically designed to carry 10-round SKS stripper clips. These were massed produced, and while functional, they are cheaply made. They will certainly work if you are on a budget, however there is a more moder version currently being manufactured by 7.62 Tactical. The chest rig will carry 80 rounds (8 stripper clips), and has MOLLE attachment points for a blowout kit, radio, etc.

There are many cool looking replacement stocks on the market. I don’t think that any of them will help you shoot the rifle any better than the original. Unless your stock is cracked or broken I would save the money that you would spend on a new stock and buy ammunition and stripper clips. There are cases where the shooter may appreciate the lighter weight of new, synthetic furniture, especially if they plan on carrying the rifle for extended periods of time. In that case, shop away. Make sure that after you replace the furniture on your rifle that you thoroughly shoot it to make sure that there is no interference with the operating mechanism and that the rifle is still reliable.

There are many aftermarket optic mounts for SKS rifles. While I don’t have any experience with these, a general rule for all firearms and accessories is that you get what you pay for. Don’t go cheap. Also, do your internet research and see what has worked and hasn’t worked for other people.

Keep in mind that you will have to mount a short tube scope so that it will not interfere with the top-loading of the rifle. You will not need a lot of magnification, as the 7.62×39 has the same basic trajectory as a Winchester 30/30 round. You probably won’t be using this rifle long distances (past 300 meters). 4x magnification is probably the maximum that you would ever need. A zero-magnification red-dot optic is perfectly acceptable for the rifle. 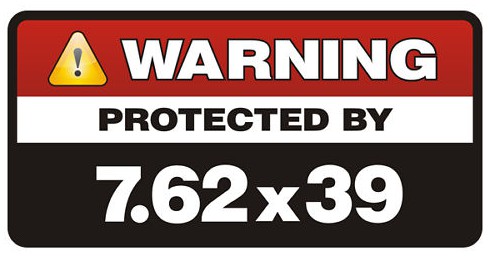