NOAA (National Oceanic and Atmospheric Administration) weather radios are also an important item to consider. The broadcasts by the agency share weather and related emergency information designed for specific listening areas. There are approximately 425 NOAA transmitters currently active in America, the US Virgin Islands, Puerto Rico, Saipan, and Guam. Canada has its own version of the weather alert system, one which can be reached via the Internet.

Each NOAA transmitter covers roughly 40 miles from the device site. About 80 percent of the United States is included in the NOAA transmitter area. Typically, the weather alert agency’s broadcasts are on air 24-hours a day and updated when special warnings or hazards become apparent. During times of severe weather, amateur HAM radio operators contact the NOAA weather system on specific radio frequencies to offer local updates.

NOAA operates on seven different frequencies outside of the typical AM/FM radio bands: 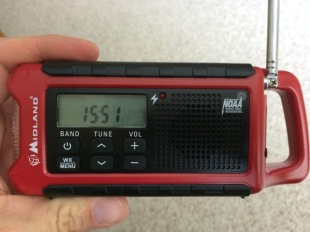 I recently acquired a Midland ER200 AM/FM/Weather radio from, of all places, Walgreens drug store. I have seen them for sale at REI and various online prepping websites, and reviewed by several preparedness magazines. The usually retail for around $50, but Walgreens had them on sale for $30. The radio has a lot of cool features that make it perfect for your home emergency preparedness gear, your bug-out bag, or general hiking backpack.

The radio uses a rechargeable 3.7 volt Lithium-ion battery. The user is able to replace the battery when eventual time and use render it no longer able to hold a charge. There are three ways to recharge the battery:

Uses During Emergencies Or While Visiting The Great Outdoors:

Midland is quality gear. Owning a single, lightweight piece of gear that receives three bands of radio, houses a 130 Cree LED flashlight, is rechargeable while off-grid, and is capable of recharging most cellphones is a no-brainer! Go buy one!