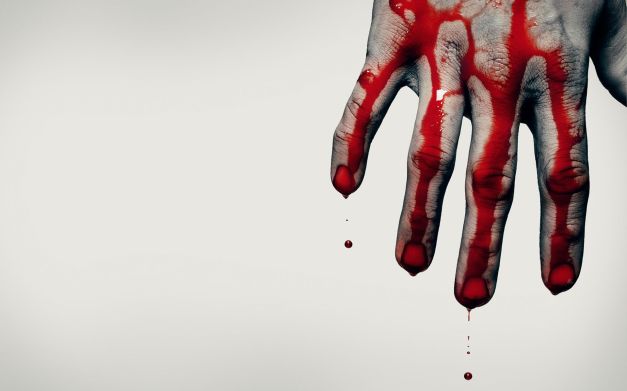 Arterial bleeding: loss of blood from an artery, which is a blood vessel that carries oxygen-rich blood from the heart through the body. Blood will spurt with each heartbeat. Color is bright red. Usually severe and hard to control. Need immediate attention.

Venous bleeding: loss of blood from a vein, which is a blood vessel that carries blood without oxygen back to the heart. It has a steady flow. Color is dark red. Easier to control than arterial bleeding.

Capillary bleeding: the loss of blood from capillaries, which are the smallest blood vessels. Blood flow is usually slow. Threat of infection is greater with capillary bleeding than it is with arterial or venous bleeding.

Abrasion: Damage to the skin from a scrape by a hard surface.

Incision: Sharp, even cuts from sharp objects, possibly resulting in heavy bleeding and damage to muscles, tendons, and nerves.

Lacerations: Jagged or torn soft tissues usually caused by objects having sharp, irregular edges or by force exerted against the body. Tissue damage is greater than in incisions.

Avulsion: Tissues torn or hanging from the body, accompanied by heavy bleeding.

Amputations: Complete removal of body extremities. Removed part should be wrapped in a moist dressing and placed in a plastic bag. The bag should be placed in ice water and transported with the victim to possibly be reattached.

Crushing: Parts of the body caught between heavy objects. Includes bone fractures as well as injuries to internal organs, and possible heavy external and internal bleeding.

First-Aid for extreme external bleeding, such as arterial bleeding or amputation:

Internal bleeding ranges from small bruises to conditions serious enough to cause shock, heart failure, or lung failure. If the victim is not properly checked, internal bleeding may go unnoticed.

Signs and symptoms: bruised, swollen, tender, or rigid abdomen. bruises on chest or signs of fractured ribs, blood in vomit, wounds that have penetrated the chest of abdomen, bleeding from the rectum or vagina, fracture of the pelvis, abnormal pulse and difficult breathing, and cool, moist skin.

Apply cold packs (not directly on the skin) to the area to prevent tissues from swelling and to slow internal bleeding.