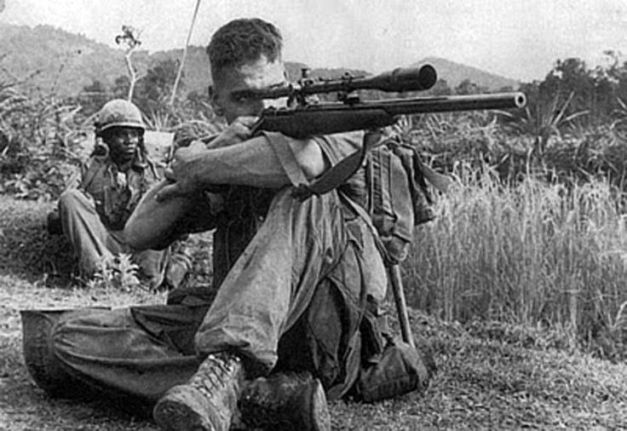 Reasons To Own A Bolt-Action Rifle:

Ten Reasons To Own A Bolt-Action Rifle: Submitted by Slappy

With the popularity of AR-15 rifles ever on the rise, one might question the need or even the desire to own a bolt-action rifle. The AR style rifles are lightweight, easy to operate, highly customizable, reliable, versatile, accurate, and just plain fun to shoot. They are very practical and useful firearms that have come to represent all that is tacti-cool for many shooting enthusiasts. So what about the venerable bolt gun?

Long before semi-automatic rifles became the rage, bolt-action rifles were the mainstay in shooting sports. While semi-autos do have obvious advantages such as magazine capacity, rapid reloading, and rate of fire, the trusty bolt-action rifle is still an incredibly effective, popular, and useful firearm in today’s world. The following are 10 reasons (in no particular order) why every shooter should have at least one bolt gun in the safe.

A bolt-action rifle is ideal for teaching and improving marksmanship skills at every level. Studies have shown that a shooter will tend to shoot a bolt-action rifle more accurately than an equally capable semi-auto. Knowing that a follow-up shot is not just a simple trigger pull away forces the shooter to slow down, be patient, and focus more intently on the shot. This is a great way to learn and practice shooting fundamentals and get into the “zen” of marksmanship. Some quality range time with a .22 bolt gun can go a long way toward maintaining and improving the skills of every shooter. It is the perfect tool for indoctrinating new shooters in proper marksmanship technique. A marksman should strive to become one with the rifle and take every opportunity to improve his or her skill set. Remember, only hits count.

Generally speaking, most bolt-action rifles tend to be simple, strong, and well built. There are fewer moving parts than in a semi-automatic rifle, which means that there are fewer failure points that could cause a malfunction. The simplicity and strength of the bolt-action coupled with the fact that it is manually operated also means that it can handle a wider range of bullet weights and powder charges. Bolt action rifles are capable of reliably firing everything from very powerful magnum loads down to the lightest subsonic rounds. In many cases, bolt guns can safely and effectively function with ammo that might fail to cycle and/or damage some semi-automatic actions.

Bolt guns are usually considered to be the preferred platforms for long-range shooting. Because they do not extract energy from the powder charge to operate the action, more of the potential energy in the cartridge can be used to propel the projectile. This can result in an advantage in effective range over a semi-automatic rifle of the same caliber. The very attributes that make bolt-action rifles reliable and durable also make them inherently accurate if they are manufactured and set up correctly. Many centerfire bolt-action rifles on the market today are capable of shooting three shot groups measuring an inch or less (1 Minute of Angle) at 100 yards with the right ammunition. This applies to hunting as well as target and tactical rifles as 1 M.O.A. has effectively become the industry standard. Many older hunting and military surplus bolt guns are also capable of outstanding accuracy with little or no modifications.

An accurate and reasonably well made bolt-action rifle can be much less expensive than a semi-automatic rifle with the same accuracy potential. While it is possible to spend many thousands of dollars on a custom bolt gun, a mass-produced rifle that is capable of 1 M.O.A or better can be had for less than $500. It is now becoming standard for these rifles to have free floated barrels, match grade triggers, and well bedded actions. The used market can yield even better deals. It is not uncommon for used hunting or military surplus rifles to be bought for under $400. In many cases, this price will include an entry-level scope. While a semi-auto can be just as accurate as a bolt gun, the cost can be prohibitive for many shooters. When it comes to rifles, the bolt-action can offer the best bang for the buck.

While semi-automatic rifles such as the AR-15 continue to be offered in a wider range of calibers, bolt-action rifles are available in more caliber choices than any other type of firearm. It is a safe bet that there is a bolt gun chambered in just about every caliber available today. This can be advantageous by providing a cartridge that is more precisely suited to the intended application and preferences of the shooter. Another important consideration is that during ammunition shortages, calibers that are popular in semi-automatic rifles such as .223/5.56 and .308 can be difficult to find. Many calibers used primarily by bolt-action rifles are often more readily available.

Ease of Cleaning and Maintenance:

Because bolt guns are simpler that semi-autos, they are also easier to clean and maintain. There are fewer moving parts to check and lubricate, fewer bolts, screws, and springs to manipulate and sometimes replace, and no gas tube to disassemble and clean. A well made and well cared for bolt-action rifle will last for generations with simple cleaning and maintenance.

Bolt action rifles can be made very lightweight and svelte. A tactical, competition, or military surplus rifle can be quite heavy and cumbersome of course, but lightweight, slender, and portable bolt guns are plentiful. The tradeoff for a very lightweight rifle is often an increase in felt recoil, so it is up to the shooter to select the rifle that provides the best balance between the two to achieve the desired shooting characteristics. If form follows function, then the sleek contours of a hunting rifle become very logical. There are few protrusions to catch on trees and brush or snag a hunter’s own gear as the rifle is shouldered or unslung. Bolt action rifles can be shot well from just about any shooting position, but they are especially suited to the prone and rested positions. Most of them do not have large protruding magazines that can make shooting from these positions more difficult. Most bolt guns can also be top loaded to fill the magazine or loaded one round at a time. This can be an advantage when shooting from the prone position as magazine changes can sometimes force the shooter to take time out and visually disengage a target when on the ground. For the shooter that requires higher magazine capacity, bolt action rifles with detachable magazines are available.

For those that hand load ammunition, it is easier to produce ammo for the bolt gun if you are reloading for the same rifle. The spent case does not need to be completely resized because it is going to be manually loaded into a chamber that it has already been fired from. It is also easier to save spent brass as the shooter can collect each case by hand after the shot. As long as excessive powder charges are not used, the cases are not as stressed and tend to last longer than those used in semi-auto rifles. The bolt-action also tends to be more tolerant of loading variables and inconsistencies as long as the rounds are loaded within safe pressure limits. This makes it the best platform for the beginning hand loader to learn and refine the required skills necessary to be safe, proficient, and successful.

Because a bolt action rifle has a slower rate of fire, the tendency is to use less ammunition during a day at the range compared to a semi-automatic rifle. Sending a full magazine downrange as quickly as possible in an AR-15 can be good practice and great fun, but that can get pricey and rapidly deplete ammo supplies. A more disciplined approach to shooting will not only improve a shooter’s skills, it can save money and ammo. Referring back to the topic of marksmanship, only hits count.

Depending on the state a shooter resides in, the political and legal environment can be restrictive and even outright adversarial for owners of semi-automatic firearms. Some state governments are constantly trying to enact more regulations, restrictions, taxes, and even bans of any semi-automatic rifle that is deemed an “assault weapon” by anti-gun politicians. It is also possible that future federal legislation could be enacted that would be detrimental to owners of certain types of semi-automatic firearms. The bolt-action rifle is usually not the primary target of such legislation and is even allowed in many countries that have very restrictive gun control laws. The bolt gun seems to be viewed with less hostility than rifles such as the AR-15 and can afford a shooter a greater degree of discretion and acceptance when shooting in more restrictive states or countries.

Bolt action rifles add a great deal of versatility and capability to any shooter’s arsenal. They are a perfect complement to semi-automatic rifles as well as other action types, and can help broaden and improve the shooting skills of any firearms enthusiast willing to devote the time and effort to some disciplined marksmanship practice. Speaking of other action types, lever-action rifles share many of the same advantages of bolt-action rifles and also offer a few additional features and capabilities such as external hammers and rate of fire. They also have a few disadvantages such as being awkward to operate in the prone shooting position and limited caliber selection. However, they are also very rugged, reliable, versatile and capable firearms with a loyal following that deserve serious consideration.

Parts of a Bolt Action Rifle:

Popular Long Action By By Manufacturer: