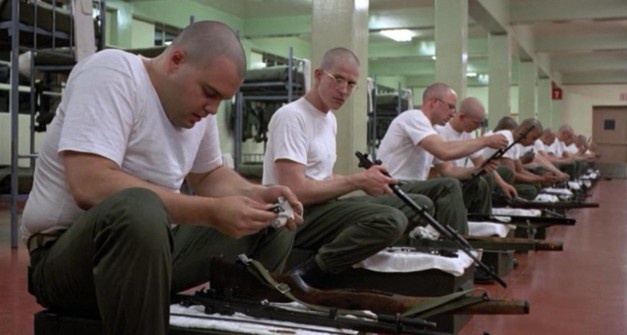 There are a few chores in our lives that need to be done at regular intervals. Rotate tires, change oil, change batteries in smoke detectors, pay bills, pay taxes, etc. I use my birthday as a reminder to replace the batteries in my smoke detectors and to check the pressure in all of my fire extinguishers.

If you carry a firearm or have any firearms staged in your home for self-defense then there are a couple of other chores that you should do too. Several of these should be accomplished at least twice a year. To make it easy to remember I choose to do them when we change the clocks back and forth between standard time and daylight savings time (fall & spring).

Wipe Them Down And Lube Them:

Hopefully you are able to routinely practice with your defensive firearm(s) and are disciplined enough to properly maintain them after each practice session. You may not have had the chance to practice lately (shame on you…shame), or you may practice with one weapon, but others don’t make it to the range. On several occasions I have witnessed someone bring a firearm out to the range after it has spent an extended time in storage and it won’t function correctly. Many times I have seen empty casings that stuck and wouldn’t fall free from a revolver’s cylinder, and cartridges fail to feed or a casing fail to eject from a semi-auto. Usually I will let the shooter struggle for a few minutes before I ask if I can help (I don’t want to insult anyone’s intelligence or try to give advice to G.I. Joe who is just home from the war). I always ask when was the last time they shot it. “I dunno…a year or two ago. I cleaned it before I put it away. I can’t figure out what’s wrong.”

Many petroleum bases lubricants deteriorate into sticky varnish over an extended time period.

A year or two ago the shooter cleaned his gun, and afterwards its action was slick as warm butter. Two years later the residual lubricant in the chamber and on the moving parts has turned into a thin, film of goo, similar to the consistency of maple syrup. Rounds may fail to completely charge into battery, or empty casing may get stuck in the chamber to a point that the extractor can’t pull them out. Slides may drag and move sluggishly on frames and not move as freely as they should. I have on several occasions helped a shooter break down their firearm, scrub its parts with an old toothbrush and some fresh gun oil, and then run a brush and patch through the chamber and barrel until they were clean. After a good cleaning their guns always run like a scalded dog (southern slang for really fast). It’s bad enough when a gun that was cleaned two years ago acts like that. Imagine if it was put away dirty and all of the gunshot residue (GSR) impregnated oil turned to varnish. It ain’t gonna shoot.

So what does this mean to you? If you have firearms that you intend for self-defense purposes (carry on your person, or staged at home) you should keep them cleaned and lubricated on a regular basis. Just because it was cleaned a long time ago and then put into storage does not mean that it is still a dependable self-defense tool. Twice a year I fully disassembly any firearms that I might stake my life on and give them thorough cleaning and detailing. Is this overkill? Maybe, but I’ve seen “clean guns” fail too many times, but every time that I shoot my recently maintained firearms they always go bang. Coincidence?

If you are going to keep magazines loaded in your carry gun or home defense gun, I would suggest rotating magazines every six months in order to keep the magazine springs from loosing strength. Many believe that with modern metallurgy the magazine springs will not develop memory when compressed over long periods of time, however my equipment is expensive and my life is too important to take a chance.

Regardless of you metallurgical beliefs, your carried magazines will accumulate dirt, lint, and salt from sweat. After six months of duty it will be a good time for you to disassemble and inspect your recently carried magazines for cracks or dents, and to clean out any dirt or lint that collected in it while it was loaded. You may choose to use a gun oil and rag to wipe off the magazine spring and wipe out the inside of the magazine body to help prevent corrosion, but be sure to wipe them completely dry inside and out before reassembly. Any buildup of oil can penetrate cartridge primers and diminish reliability.

When we change the clocks in the Spring and Fall seasons, I rotate my magazines. I have my magazines numbered with a paint pen and simply download the magazine(s) that I’ve carried for the last six months and then upload the next magazine(s) in sequence.

If I use a light or optic frequently then I will replace the batteries every six months, whether they need it or not. I use the old batteries in other range guns or the kids’ toys.

Save old, black or dark blue cotton t-shirts and cut them up into 8×8″ rags for gun cleaning. Avoid using old white t-shirts. Using white t-shirt rags on firearms with rough finishes, such as Parkerizing, will leave white lent all over your firearms. You will be much happier with black. 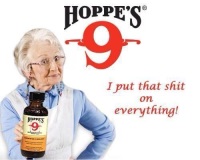 Over the years I have witnessed shooters at the range suffer as their shot groups got bigger and bigger, and only after many expensive and frustrating rounds later realize that their optics was no longer firmly mounted on the weapon. Over time the weapon’s recoil had loosened the screws of the mounts to the point that the scope could no longer hold zero. I have also seen many accessories such as backup iron sights (BUIS), grips, rails, light, and lasers start to wiggle loose. There is a simple and inexpensive solution to this problem. Loctite Threadlocker.

Whenever you add accessories to a firearm that involve screws you should always be sure to use a dot of Loctite “Blue 242” threadlocker on the threads of the screws. If you don’t then the screws will eventually start to wiggle loose over time. Don’t even bother mounting an item on a firearm if you aren’t going to Loctite the threads. It won’t stay on.

There are two kinds of Loctite.  Be sure that you are using the semi-permanent (“Blue”) and not the permanent kind (“Red”).

“Blue” (242) is the semi-permanent kind. Even though it says “Blue” it comes in a red tube (as seen right in the photo of the packaging). This is the kind that you want. A dot on the screw’s threads (like the photo on the packaging) will keep the screws from backing out of the attached item during the repeated abuse that a high-caliber firearm can dish out, but you will still be able to remove it when you want to.

“Red” (272) Loctite is the permanent kind.  Do not buy this.  To release it you usually have to heat the set screw with a torch.  You are guaranteed to damage or destroy the part that you are trying to remove.

Loctite can be purchased at Home Depot, Lowe’s, and other home improvement stores.

There are many methods, but they all involve this: