Posted by The Savannah Arsenal Project on October 15, 2015
Posted in: AK-47, Philosophies, Training. Leave a comment

You are entering a no butt-hurt allowed zone.

Underfolders look cool, but underfolders suck. Cheek weld sucks. Forearm support sucks. Ergonomics suck. IMO they should never be your “go to” AK unless its all you have, or you have a significant storage space issue. If you need an AK to jump out of a plane with, or in case your tank runs out of gas, there may be a role for them. Even then, any number of folding stock options are vastly superior in literally every way.

Bolt hold-open mags (and bolt hold open anything on an AK) suck. They change how the AK is designed to operate and forces you to try to run a completely non-AR platform like a partial AR. But why?

Safety levers with the bolt hold-open cut out suck. The safety lever on an AK is designed as an idiot proof dust cover. Yes AK’s are very reliable by design. But a lot of crap can fit in that stupid bolt hold-open hole that is now permanently exposed. You are introducing a weakness into a strong design, all so that you can placate some range boss / safety nazi that doesn’t understand not all bolts hold open, and who can’t for some reason see a 20 cent fluorescent orange chamber flag? Keep the AK like it was designed and find a different range.

Krebs style / extended safeties are cool, but completely unnecessary. I had a hard on for one in theory, but when I visited Rifle Dynamics in Las Vegas the petite Casey showed me her AK, and low and behold it had the standard safety lever. I asked her about the Krebs lever and she said she wanted to learn to run the AK with the original safety and she had no problems whatsoever doing it. So I put ordering one on hold and ran the class with a standard lever and was every bit as quick as those with the big levers. There’s really no downside to them, but in my opinion, unless you have very small hands, zero advantage to them at all.

Double mag pouches suck. Aside from the theoretical advantage of being able to quickly reload slightly quicker 8 times while standing/running (LOL!) they are absolutely ridiculous when prone. Even laying on a single stack mag pouch is hard enough, but two? Forgetabowdit. If you need to carry more mags than what a single stack rig offers, carry them somewhere else. You’re not going to reload that many times while not behind cover anyway.

Don’t hang so much crap on your gun. This has been much less of a problem with AK’s until recently, but with their rising popularity comes the inevitable eye rolling Christmas tree decorating nonsense that AR’s have struggled with for the last couple decades. A red dot or a scope, and maybe a light. That is it, unless you’re actually, really running night vision, though even then it’s probably on your helmet and not your rifle anyway.

Drum mags are stupid. You’re only saving like 2 or 3 seconds per 100 rounds (you don’t think you’re firing that many rounds out in the open away from cover do you?) and you lose your ergo grip, your mono-pod and you make an already not lightweight weapon way heavier for no real gain. There may be some specialty rolls for them, but ask yourself why the professionals rarely, if ever, run them when they easily could. If they pass on them, you should too. Odds are overwhelming that you’re not doing it better than they are doing it.

AK iron sights are fine! Yes, they take some getting used to. We’re used to aperture sights on AR’s and when you first look through AK sights they don’t seem as eye friendly. But that’s how they were designed. The rear sight is much further away from your eye, which is why its shaped like that. Basically like 99% of pistols out there at a similar distance from the eye using the “line up the 3 squares” method, and you’re not running out to put round aperture sights on your pistols are you? Rifle Dynamics did come up with a smart and simple modification whereby they round off the outside corners to reduce unnecessary right angles and naturally draw the eye to the center/front post, but beyond that leave the sights alone and learn to use them.

The AK’s Sight Radius Is Too Short? : 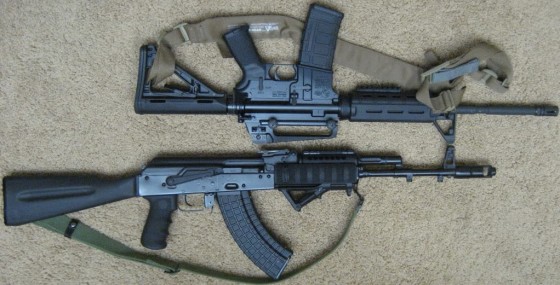 We also hear how bad the AK sights are because the sight radius is too short. Oh really?  Check out the photo to the above.

Looks about the same to me. Of course some will point out that a full rifle length AR will have a sight radius advantage over an AK. Um, duh. So? Does that mean that the M4 sight radius sucks? Not to mention hardly anyone runs 20 inch AR’s anymore anyway. But if you really, really have to have a long iron sight radius, and you’re a MOA snob that likes to rag on AK’s for some reason, prepare to get served, hard:

How much accuracy do you need?

AK Stocks Are Too Short? :

Warsaw length stocks are FINE! I’m 6 feet tall with relatively long arms. I used to be a length-of-pull snob. I’ve reformed. This is how the gun was designed. Some will say that the (slightly) shorter Warsaw stock is because the malnourished commies were smaller, or because they wore heavier clothes or whatever. Most in the class ran their AK’s with Warsaw length stocks with absolutely no issues at any distance at any application. When you’re holding the AK out in front of you for any length of time, you never, ever think to yourself “wow I really wish the fulcrum of this weight was further out”.

I especially love the SBR/”truck gun” phenomenon where guys pay big money and go through the hassle of building a “shorty” only to put long stocks on them (and sometimes blast “directors”) that make the gun maybe a couple of inches shorter in practical applications. Yet then those same guys will run that ridiculous “pistol brace” thing on something else and act like it’s some ground breaking concept. But hey, they can clear all those rooms 2% better. Or something. I guess. Whatever. Embrace the Warsaw length stocks; they are how the platform was designed.

Whatever you intend on running, get training and see how it actually works for you. The range isn’t even close to sufficient vetting of gear and kit, and the mirror at home dang sure isn’t.

Keep it simple. Get training. Get in shape. Vote. Read history. Stay free.