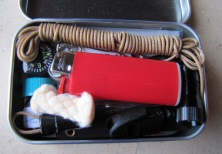 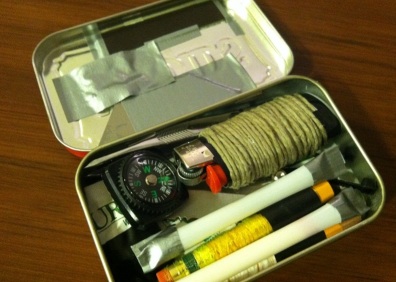 When Glorious Leader Obama blabbed that the US Navy’s Seal Team Six killed UBL there were countless newspaper and magazine articles about the mysterious men and their gear (whether any of it was factual or conjecture is irrelevant as there were some pretty good ideas that can be applied to civilian prepping).  An article in USA Today showed a photo of a Navy commando and described their gear.  The article suggested that regardless of the mission and whatever mission specific gear and weapons they carry, they always carry a very basic survival kit in one of their pants cargo pockets and a blowout kit or first-aid kit in the other cargo pocket.  The logic is that if they lose all of their other gear, deplete all of their ammo and ditch their gear to lighten the load while they are on the run, or have to lose their gear to blend into the local populous while they attempted to E&E (escape & evade) that they would still have the means to survive, and to patch up any extra holes that they acquired on the mission.  Included in the pocket survival kit was a means of illumination, a way to make fire, and enough of the local currency to bribe their way out of trouble. END_OF_DOCUMENT_TOKEN_TO_BE_REPLACED