Bug-Out vs. Shelter In Place

Shelter in Place or Bug-Out? Stay or Go?

There are two major types of major disasters: those where you shelter in place, and those you bug-out for.

Examples of disasters that you would stay and shelter in place include tornadoes, earthquakes or any other disaster that happens without any warning.

Disasters for which you might have time to bug-out, and which would be foolish to hang around for, include wildfires, volcanoes, nuclear emergencies, and hurricanes. It’s a no brainer that you need to leave when:

While the ability to evacuate is a critical part of emergency preparedness, the assumption that evacuation should be the first choice in any survival scenario is flawed. Placing all your hopes in getting to a retreat with the limited supplies that you can carry is a big gamble.

Shelter in Place assures the maximum safety of individuals in their present location when dangers of movement exceed the relative risk from the threat, or movement can not be completed in a reasonable timeframe.

Stay or Go? Factors In Your Decision Making:

Bugging-Out? Where Are You Going?

Benefits of Bugging Out:

Dangers of Bugging Out:

Just Stay Where You Are: 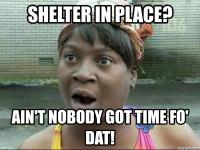 Shelter in Place assures the maximum safety of individuals in their present location when dangers of movement exceed the relative risk from the threat, or movement can not be completed in a reasonable timeframe. Examples of disasters where you would stay and shelter in place might include tornadoes, earthquakes or any other disaster that happens without any warning. Sheltering in place might be your only option when:

Benefits of Sheltering in Place:

Danger of Sheltering in Place:

When it hits the fan America’s population centers will explode in violence, looting, and total breakdown of law and order. It’s a theory put forth by numerous survival and relocation specialists, and one that makes complete sense if you consider what happens in a truly serious collapse-like scenario.

Because every crisis that threatens, even a local crisis, can turn exponential because of close proximity to people who cannot help themselves. Even good people panic in a crisis.

After a major disaster motor travel may be difficult because gas stations will be without power and won’t be able to pump fuel. Be ready to transport your own fuel.

Travel early in the morning will be your best bet, but even then you have to be ready to be a fish in a sea of refugees, all looking for the same things in a countryside filled with people who will quickly become intolerant of the thousands of needy, homeless families.

The farther you can get away from the affected area, the better, but your range is usually dependent on the preparation you have done before a catastrophe.

Provide some type of communications between other vehicles in your convoy (CB or GMRS). Cell phones will probably be inoperative.

Where Not To Go:

Recent U.S. census data indicates that out of the 3000 counties in the United States, fully 50% of the population lives in just 146.

If you want to have any chance of surviving a wide-spread catastrophic event by avoiding the hordes that will be searching for critical resources in its aftermath, then check out the following map to get a visual reference of the areas you want to stay away from.

Those looking for strategic retreat locations or homes outside of major cities consider highway proximity. Be at least five to seven miles away from any major thoroughfare, which is generally outside the range people want to venture off familiar roads, and far enough away to make any ‘walkers’ too tired to attempt the trip without ample clean water and food.

How To Get There:

The 72 Hour Bag or your Bug-Out Bag is your sustainment load, or your gear needed to survive for at least 72 hours. The United States Federal Emergency Management Agency (FEMA) recommends that every household should have a enough emergency supplies to last your family at least three days. Your kit should be small and light enough to be portable should you have to bug out. Your Bug-Out Bag is your sustainment load that will ensure that you will have enough drinking water, food, shelter, medical supplies, means of communications, and means of self-defense to sustain yourself throughout the emergency.

A more detailed explanation of the bug-out bag can be found on the 3rd Line Gear: 72 Hour Bag or Bug-Out Bag section of Savannah Arsenal’s Gear Page.

A list of suggested contents can be found in the Bug-Out Bag Checklist on Savannah Arsenal’s Checklist Page.