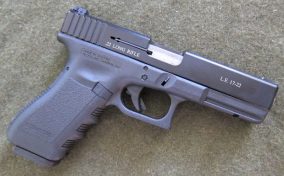 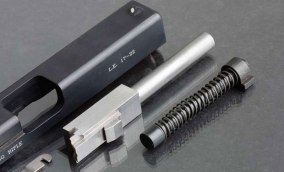 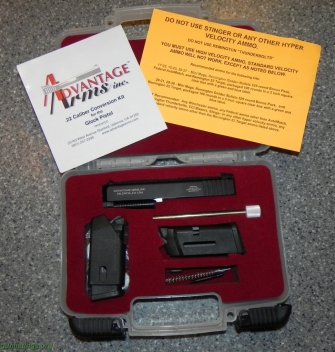 Your conversion kit will come with one 10-round magazine. Extra magazines can be ordered directly from Advantage Arms’s website. There is a 15-round magazine for G-17/22 and G-19/23 kits, but it is not flush-fitting and will extend about half of an inch out of the bottom of G-17/22’s magwell.

Like the G-17/22 kit, the G-26/27 kit runs very reliably with CCI Mini-Mag, Winchester M-22, Remington Golden Bullets, and Gemtech subsonic ammunition, however none of this ammunition would function with a conversion kit with a suppressor attached. Don’t waste your money on a threaded barrel in an attempt to suppress an Advantage Arms .22LR converted “Baby Glock”.

Advantage Arms states in the instructions and on their website that the conversion kits will not work at all with CCI hollow-points, Winchester (except for the new M-22 ammunition), Remington Thunderbolt, PMC, or Federal’s bulk-pack ammo.  Avoid these types of ammunition with the conversion kits.

As with any .22LR firearm, test a couple of small boxes of ammunition for reliability before stockpiling, however you should expect great results from the Winchester M-22 and should plan on stockpiling vast quantities of this ammunition. These kits are super fun, and you will burn through it fast.

If you don’t have the patience for a detailed explanation, then you will still be well served by the information above.  If you want to know more, keep reading.

Rather than continually switch the slides back and forth on our Glocks, several of us have been able to find brand new complete Glock frames on Gunbroker.com. We have put the conversion kits on the new Glock frames to create dedicated .22LR caliber Glock pistols.

The manufacturer recommends CCI”s “Mini-Mags” (40-grain round nose, not hollow-point) or Remington’s bulk pack “Golden Bullets” (pictured right). The manufacturer notes that Remington Golden Bullets work quite well, however, you will get more light strikes and inconsistent loads than with the CCI Mini-Mag loads. With a clean conversion kit and the Remington ammunition I have fired well over 300 rounds before the first malfunction.

Advantage Arms states in the instructions and on their website that the conversion kits will not work at all with CCI hollow-points, Winchester, Remington Thunderbolt, PMC, or Federal’s bulk-pack ammo. 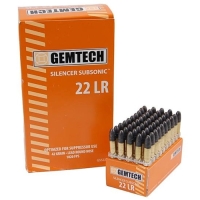 As further discussed above, my Glock 26/27 and Glock 17/22 conversion kits normally love Remington Golden Bullets, except that they perform miserably with a suppressor attached. Both kits work great with Gemtech’s subsonic ammunition (pictured right), either with or without a suppressor attached.  Grade “A”.

You can order this ammunition directly from Gemtech’s website or a few limited online vendors.  It is usually hard to find in stock.  You can add your email to Gemtech’s waiting list and they will notify you when it is in stock.  Don’t delay ordering.  Usually it is sold out by the end of that same day.  Buy in bulk.  You will be glad you did.

This ammunition also functions well in my Ruger 10/22 rifles as well as a CMMG .22LR adaptor kit equipped AR-15 rifle. 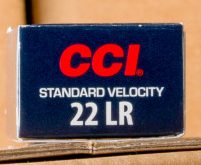 I tested Winchester’s M-22 copper washed 40-grain ammunition (pictured right).  Although this ammunition is not mentioned in the conversion kit’s instructions, it ran perfectly.  You can definitely tell that it has more power than Remington’s Golden Bullets.  Of course it doesn’t have the power that a 9mm has, but when you pulled the trigger you could definitely tell where you money went for this excellent ammunition.  It is definatley snappier than the CCI Mini Mags and the Remington Golden Bullets.  You should expect roughly the same velocity and ballistics as CCI’s Mini-Mags ammunition (discussed above).

This is outside of the scope of Advantage Arms conversion kit discussion, but Like Gemtech’s subsonic offering, this ammunition also functions fantastic in my Ruger 10/22 rifles as well as a CMMG .22LR adaptor kit equipped AR-15 rifle.  The only reason that I gave the Winchester M-22 an overall grade of “A-” is because when fired from a rifle it is supersonic and produces a loud crack when the bullet exceeds the speed of sound.  However when fired from the short barrels of the the Advantage Arms conversion kits it doesn’t achieve supersonic velocity, so it doesn’t produce the supersonic crack that it does from a rifle.  If you are going to shoot this ammunition unsuppressed from a Ruger 10/22 or CMMG .22LR conversion kit for AR-15 rifles, then it gets an “A+” for reliability, but it isn’t the best when wanting to shoot quietly with a suppressor.  I will plan on making this M-22 my primary ammo for loud rifle shooting, and loud as well as suppressed pistol shooting.  I will use Gemtech for quiet rifle shooting applications.

Ballistics By The Inch states that with CCI’s 40-grain round nose bullets you should expect a velocity of 1014 feet per second when fired from a 4″ barrel.

I used the Ballistic iPad app, and assuming the 1014 feet-per-second velocity and a sight height-above-bore of .625″, I calculated the best distance to zero the pistol for the flattest trajectory is going to be 8 yards. With an 8 yard zero you can, of course expect:

With this zero you can expect to hit within +/- the height of the sights above the bore (.6″) out past 50 yards.

At 100 yards your rounds will impact approximately 10 inches below point-of-aim. At 100 yards you can expect a measly 71 foot pounds of energy out of the bullet, so it is not realistic to effectively defend yourself or to hunt humanely at that distance, but it is nice to be aware of the expected performance should you ever be forced to.

Threaded barrels are available directly from the manufacturer so that you can shoot your conversion kit with a suppressor. The barrels come with an adaptor that steps up the thin threaded barrel (thread pattern unknown) to a 1/2×28 thread pattern that is common to most .22LR suppressors (pictured right). 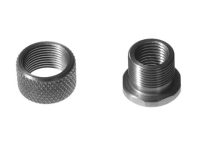 Both of my conversion kits function great with Gemtech’s subsonic .22LR ammunition and an Advanced Armament Corporation Element II suppressor.

I have found that it is VERY important to make sure that the slide rails are lubricated when using a suppressor. If the slide rails start running dry the adaptor kit may still keep running fairly reliably, however if you add a suppressor you may start suffering failures to fully seat a fresh round all of the way into the chamber or light firing pin strikes. Make sure that prior to shooting with a suppressor that you let a drop of gun lube run down the channel of the slide rails. Just a drop on each side will do, but will make all of the difference in the world. 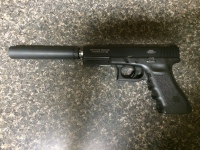 It is very quiet. It is interesting to note that with an Advanced Armament Corporation’s Element II suppressor attached to a full-size frame Glock (G17/G22) and Advantage Arms conversion kit, I have had great success with the CCI Mini-Mag, Winchester M22, and Gemtech ammunition discussed above, but have suffered dismal results with the Remington Golden bullets that the kit normally loves when there isn’t a suppressor attached.  While the kit normally runs great with the Remington ammunition, but when I have tried to use the suppressor the gun suffers more light strikes than it successfully fires. If you use a suppressor, stick to CCi Mini-Mags, Winchester M22, and Gemtech Subsonic ammunition.

I have found that a significant component of the “bang” comes from the opening action as the pistol cycles when fired.  If you hold the back of the slide with your thumb so that the action won’t open and cycle, your suppressed shots will be significantly more quiet.  Of course you will have to cycle the slide between each round, but if you want to shoot super quiet, then this is the technique to use.  If you practice holding the slide closed, and then executing a failure-to-fire drill between each shot (slap the magazine and then rack the slide), you can put very quiet rounds fairly rapidly on target. 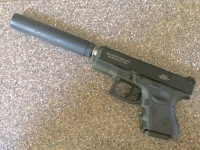 I have had terrible experience using a suppressor with this kit.  With the factory threaded barrel and no suppressor it runs great with CCI Mini-Mag, Winchester M22, and Gemtech subsonic ammunition, but it absolutely runs terrible with an attached suppressor.  Suppressor = Failure to fire or failure to eject.  No suppressor = great reliability.  At the current time I can not recommend the G26/27 conversion kit for suppressor use, but if you are planning on not using it with a suppressor, I can’t recommend it enough (with the right ammunition, of course).  I will continue experimenting and adjust this paragraph to reflect any new findings.  If you have used this kit with any other type of suppressor, please share your experience with us.  As of May 2017, Savannah Arsenal’s recommendation is to not waste your time or money attempting to suppress this kit.