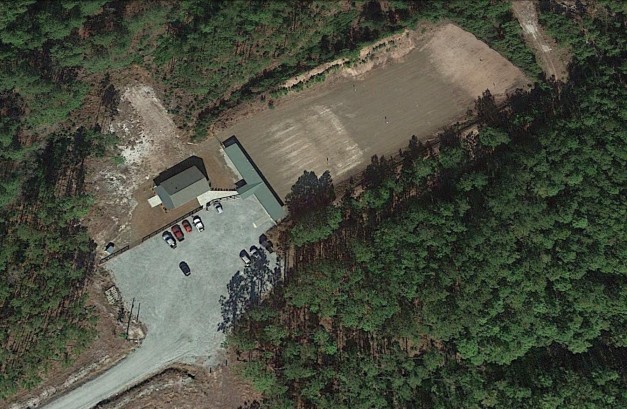 Originally you had to provide your own target stands that have no metal, and that are tall enough so that the bullet will hit the berm after passing through the target.  As of November 2015 they provide and require you to use their stands and targets.

There are approximately 12 shooting tables with a covered awning to keep the sun off of you while shooting.

There are men’s and women’s restroom with running water.

Originally the range facility only included the covered shooting line and a gravel parking lot.  A few years ago it was decided to build an office / restroom building.  This was built at an expense of about 20% of the parking area.  Parking isn’t a big deal during the work week, but poor planning has resulting in crowded parking during weekends.  Also, if space permitted, you use to be able to park right in front of your shooting table.  As you can see from the drone photo at the top of the page, the new building has blocked easy parking access to half of the firing line.  Also, the site planners (or bored range personnel) decided not to allow you to park in front of the other half.  You must park out in the lot, and are before entering the covered firing line you are guided via cattle fences pass the office.  This is very inconvenient as you will probably have to make several trips from your vehicle to your shooting area so as to carry your target stands, rifle cases, shooting gear boxes, etc.  You should entertain the idea of hiring a Sherpa to carry all of your gear.  The range definitely lacks fung shui, and it is obvious that it was not designed by experienced planners.

Don’t show up to the range without your pass.  You will be turned away.

There are new user requirements.  See the user submitted comment at the bottom of this page.

These rules are copied and pasted directly from the Georgia Department of Natural Resources WMA Firearm Range website.

Have Your GORP Pass When You Arrive:

Don’t even bother showing up if you do not have a valid GORP pass issued by the Georgia Department of Natural Resources.  They will turn you around and point the way back off of the property.  No exceptions.

Make Sure That Your Bullets Only Hit The Berm:

Firearms Safety Rule #4.  Know your target and beyond.  The DNR wants to make sure that your rounds terminate into the berm at the far end of the range.  The Range Safety Officers will deliver a litter of kittens if they see rounds skip on the ground prior to the berm (the logic being that when the round skips it will then sail over the top of the berm).  While setting up your targets, be very sure of where your rounds will impact after they pass through your target.

The range has official hours listed on the DNR’s website, but should any of the Range Safety Officers get sick or decide to blow off work that day, the range will, without any warning, be closed that day.  There have been several times in the past few years that I have shown up to shoot, but the Range Safety Officers never arrived to unlocked the cattle gate at the entrance to the property.  If you are going to be driving a significant distance to shoot, you might be well served to call the local DNR in Richmond Hill at (912) 727-2112 and politely inquire as to whether or not the range is open that day.  They should be able to tell you if the HMFIC at the range showed up that day or not.

Don’t show up wearing a gun.  I guess that if you properly conceal it then they won’t know that you have it, but if they see you open carry, or draw from concealment, then they will lose their minds.

You can’t draw from a holster and shoot.  Don’t even think about any trying any high-speed, tactical reloads and weapons transitions.  They will freak out.

Unless you are planning on shooting rifled slugs, don’t even take your combat shotgun out of your truck.  The only way that they will allow bird-shot or buck-shot is if you are trying to determine the shot pattern of a hunting shotgun, for which you are only allowed a few rounds, and can fire from only one particular shooting lane.

You best chance of getting a shooting table is to go early in the morning on Mondays, Wednesdays, Thursdays, and Fridays (The range is closed on Tuesdays).  The later you go in the day, the higher the probability of it being crowded and there not being a table available.  Under no circumstances should you consider going to the range on Saturday and Sunday, or any holiday.  The place is jam-packed with people.  You won’t get a table without waiting forever.  With a crowd that big you will go longer periods of time shooting, and will find yourself waiting for a “cold range” call so that you can replace your spent targets.  With the larger crowds I feel that there is a higher probability of an accidental discharge and someone getting hurt.  I don’t want to be there when it does.

The range is acceptable for sighting in a rifle, bulls eye shooting with a pistol, or drinking coffee and talking bullshit with old people, but that’s about it.  If you need to seriously train and practice for self-defense then you should take a look at the local firearms training companies in the local area and train at their ranges.