This past weekend we had a group of four ride at Windrock ATV Park, located near Oliver Springs, Tennessee, just northwest of Knoxville.  The park is located on 72,000 acres of old coal mining property and consists of over 350 miles of trails and service roads running across several mountain ranges.

We camped at Windrock Park Campgrounds, which is co-located with the ATV park.  The campground has sites and utilities for campers, small rental cabins, and sights for tent camping.  The campsite is very family friendly.  The staff goes out of their way to help you have a great time.  Usually there is an off-duty Deputy Sheriff that roams the camp at night to keep the noise and craziness to a minimum.  The camp has two bath houses which they make an attempt to keep very clean.  They do not have any firewood within the campground, so bring your own if you plan on having a campfire.  There is a place that sells firewood less than five miles away.

Two  of us rode Can-Am 4-wheelers, and one rode a Yamaha 250 cc dirt bike.  I rented a Polaris RZR 570 from Scott at Windrock ATV Rentals.  I can not speak highly enough for Scott.  Great guy to work with.  I will definitely do business with him again.

In two days we rode over 135 miles.  An equal amount of time was spent high-speed on logging and fire roads, as well as technical climbs and descents. 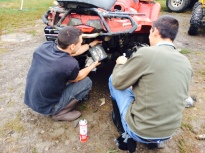 It rained the entire weekend so everything was very muddy and slick.  Many of the trails were reduced to ponds, or flowing creeks and streams.

A few flooded out trails were as much as hip deep as we drove through them.  Only a few places were deep enough that they were impassable.  There were only a couple of times when the wench on one of the 4-wheelers was needed: once to pull the motorcycle through an area of a flooded out trail, and once to pull the RZR that got high-sided with all four wheels off the ground on some deep ruts that were dug out by Jeeps.

All of the vehicles were equipped with lighting for night ops.  We did a considerable amount of night riding.  Much of the night riding was done high up in the mountains that were enveloped in the low clouds.  Sometimes visibility was a little as ten or fifteen feet.

Around midnight, almost ten miles from camp, I popped two tires on some sharp shale.  By the time I realized that the tires were flat I had driven one tire completely off its rim.  What to do?  As I have done many times while in peril, I remembered the four letters, W.W.J.D.  I have no doubt that Jesus kept up safe that weekend, however in this particular case I asked myself, What Would Jon Do?  The answer:  plug ’em and roll on.

Fortunately we had the enough people to get the job done, the skillsets to make it happen, and the assets (lights, tools, and air compressor) to remove the tires, plug them, get them sealed back on the rim, pump them up, and mount them back on the vehicle.  Three of us lifted the RZR off of the flat tire side while the forth person piled up rocks to act as a jack.  We used the tool set to remove tires.  Jon always insists that everyone have two sources of light.  The LED Q-Beam that I had in a backpack came in handy to illuminate the work area.  We used a bunch of tire plugs to seal the numerous holes in the two tires. We placed a ratchet strap snugly around the tire that was off its bead and torqued it down tight.  Someone poured water on the rim of the tire and on the wheel, both to help clean it so as to provide a solid seal, and also to lubricate it so that the tire could pop back into place when pressurized.  With the ratchet strap snug around the tire, the air compressor was used to bring the tire pressure up to 20 p.s.i. rather than the much lower 9 p.s.i. that the tire is normally run.  We bounced the over-pressurized tire on the ground like a basketball.  Because of the ratchet strap compressing the tire, the only place on the tire that could expand on the bounce were the sides of the tire.  After two bounces the edges of the tires popped out and sealed the bead of the rim of the wheel.

We dropped the tire pressure back down to 9 p.s.i., remounted it, and continued mission.