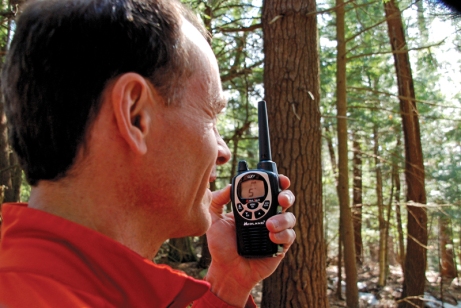 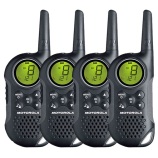 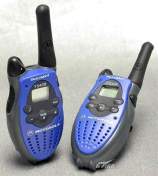 GMRS frequencies have output power than FRS freqs. If your radio has both GMRS and FRS freqs (as most do) the its output will vary depending on which channel that you use.

Radios operating on FRS freqs will put out approximately 500 miliwatts (.5 watt) and will transmit approximately 1.5 miles line-of-sight distance. Normally you will get transmit around 1/2 mile.

Channels 8-14 are FRS only freqs. Even if your radio has GMRS capability, it still will only transmit a maximum 1/2 watt on these channels.  Use these channels when your group will operate in close proximity, you don’t want your transmissions traveling too far, and you are practicing communications security (COMSEC).

Channels 15-22 are GMRS only freqs. Your radio will transmit at its full capability (as much as 5 watts). Use these channels with each person in the group has a GMRS type radio and needs to transmit maximum distance.

The advertised range of any radio set is a lie. The range shown on the box is a theoretical best case, line-of-sight scenario. It does not take into account terrain and obstructions that greatly diminish communications range.

If you don’t have the patience for a detailed explanation, then you will still be well served by the information above. If you want to know more, keep reading.

A set of quality walkie-talkies are a must-have for preppers. You can purchase a set of quality Motorola or Midland radios between $50 to $150 depending on the advertised range and features. They provide clear, simple to use communications within a team. They can provide inexpensive communications for a convoy that will stay within a couple of miles of each other. These radios are perfect to take to any large indoor or outdoor event where you may end up separated from other in your group, but still will to communicate. Other than batteries there is no cost to operate, and they will work even when the cell towers are out and the power grid is down. After a large-scale disaster where communications and emergency services might be limited or non-existent. You could have one in each household in the immediate area. If anyone had a medical emergency or security issue they could call for help on the radio and all of the other neighbors could respond appropriately. Of course you will have to manage battery logistics for all of the radios (lots of new batteries, or a solar panel and rechargeable batteries).

Recently we were on a cruise and noticed a fair number of families using Midland and Motorola Talk-About radios to keep in touch on the ship and while on shore excursions. I frequently see people using them in shopping malls and large sporting events. I’ve seen countless versions of these type radios used by wait staff in restaurants. I have often wonder how many people have actually read the instructions and really know the capabilities and limitations of these awesome little radios. Probably not too many. There is some pretty important information that if you are not aware of may limit your use of these radios. I’ve done a bunch of reading on the subject and I’ll break down the mystery of “FRS” and “GMRS” Walkie-Talkies.

Family Radios Service (FRS) radios are compact, handheld, wireless 2-way radios that provide very good clarity over a relatively short-range (approximately 1.5 miles in most real world situations). FRS radios have seven channels that are shared with GMRS radios and an additional seven channels that are for FRS use only, giving it a total of 14 channels. In order to comply with FCC standards, FRS radios have a maximum allowable power of 500 milli-watts (or 1/2 watt). FRS radio transceivers and their antennas may not be modified to extend their range. There is no license required to use a FRS radio.

General Mobile Radio Service (GMRS) is a better UHF solution for most operations.

GMRS radios are very similar to FRS radios, except for a few important distinctions:

GMRS shares channels 1-7 with FRS and one can use up to 5 watts. Keep in mind that if you transmit on these channels with a GMRS radio you will be putting out as much as 5 watts, however if you are talking to a person with a FRS only radio, they will only be transmitting at a maximum of 1/2 watt. Depending on the distance, they may be able to receive your transmission, but you won’t be able to receive theirs.

These channel are limited to 500 milliwatts (1/2 watt). (Less power = less range). Even with GMRS you will be transmitting the same power as FRS. These channels are great when your group will remain within close proximity and you want to maintain relatively secure communications (anyone too far away won’t be able to hear your transmissions).

These 7 are dedicated to GMRS only. On these channels you typically have power ratings of 1.0 to 5.0 watts and have a maximum allowable power of 50 watts for base stations. Use these channels when all members of the group have GMRS radios and you need to use them to their maximum range.

When you see a maker boasting ranges beyond two miles, the maker is probably referring to the range on the GMRS channels of the dual FRS/GMRS Radios. Most units feature distance ratings that are very optimistic. Remember, line of sight is the name of the game. 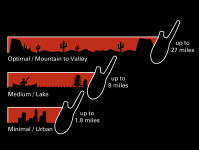 If you want to transmit long distances, you will need to be able to see your other party. If you can’t see them, chances are that your range is going to drop significantly. In real-world scenarios you have structures, obstructions, elevations,weather patterns, and electrical signals that cut those distances down significantly. As a rule of thumb, cut those ratings in half, if not more.

FRS is limited to 1/2 watt (500 mw) and the range is seldom better than a mile or two. From a practical viewpoint with trees, dash boards, seats, windshields, and other significant stuff in the way, you’re lucky to get 1/2 mile with most radios.

It is recommended that you buy a GMRS radio with powers of 1, 2 or 5 watts max which will allow you to use high power when transmitting on channels 1-7 which are “shared” with FRS and GMRS radios. Frequent radio check-ins will prevent this range limitation from sneaking up on you and will mitigate communications losses and blackout from terrain and structures.

The privacy code feature will subdivide channels into more channels so that the user can find a clear channel to use when other are taken. These sub-channel are referred as “Code” and the appropriate number (example: Channel 4 – Code 3). In a busy radio environment, you and your party might get traffic on Channel 1 – Code 0, but when you switch to Channel 1 – Code 5, you find it clear to use. Most radios have 22 privacy codes and some have more, making plenty of channel/code combinations to choose from. Choosing “Code 0” will disable all of the sub-codes and allow you to monitor traffic on all of the selected channel.

BE AWARE: If you only learn one thing about FRS and GMRS radios from this post, then this should be it: Privacy codes do not work the way that you probably think that they do. The “privacy codes” do not give you privacy!  They don’t encode your transmission. Instead they encode your receiver to pick up transmissions on the same privacy code, and limit YOUR ability to hear others on the same frequency near you. Example: You are on Channel 3 – Code 4. You can only hear transmission on the same code, but if some else were on Channel 3 – Code 0 (“Code 0” = no privacy code) they would be able to hear all transmissions on Channel 3, regardless of code, including yours.I would recommend operating “Code 0” so that you can be aware if anyone is operating on the same frequency. If you operate on any other code then you may not be aware of anyone else operating and they may be able to monitor your traffic on their radio when selected to “Code 0”. Keep in mind that unless they transmit then you will have no way of knowing that they are on the frequency and are monitoring. At least if they speak then they will give themselves away.

Do not waste your money on encrypted units. Most use simple speech inversion circuitry which will confuse the basic moron but won’t slow down a smart 12-year-old with access to common gear lying around the house. If “da man” is within range then encryption ain’t gonna help you anyway.

The FCC demands that you pay a $75 tax (license) to operate on GMRS. They readily admit that the purpose of the tax is to “catch scofflaws” who owe child support or the IRS. Due to the short-range nature of GMRS, enforcement of the rules has been rather lax. Anyone can buy a GMRS rig and most are tossing the paperwork in the trash. No one will check to see if you have a license unless you interfere with another licensed operator. So, NEVER interfere with a frequency when it is in use or another operator.

Also, the FCC issues a call sign with each new license. It is a 3 by 4 call that should be very familiar to the old Class D CB operators. A GMRS call will look like this: KFW-1234. So, if you don’t have a call, just make one up.

Be aware that the FRS/GMRS frequencies are in the same band used by local, State and Federal law enforcement and that they can monitor your comms in a split second.

To set up a GMRS network for your AO that has approx. 6-15 mile coverage; take a 5 watt HT with a speaker mike and connect it to an outdoor antenna mounted 20-30 feet high. Use the best low loss 50 ohm coax you can find such as LMR-400. Keep the cable run 50 feet or less. For general coverage in all directions use a omni-directional vertical such as a J-pole or one of the readily available commercial antennas. To increase your range further, and for a little more ComSec, take a 10db gain 440mhz 4-element beam, cut it down for 1.1 SWR on the GMRS band and turn it with a TV rotor. You could also build this antenna out of rigid copper pipe for almost nothing.